The 2018 Jazz  in the Garden Music Festival started with a bang from a local artist A. Randolph, singing his own tunes and some hits from back in the days; making everyone get up onto their feet and jump around. Warming the crowds up for all that was to come. A. Randolph would continue to play onset, in between acts getting us ready for the next performer, it was like every time he hit the stage he got better and better hyping up the crowds. Overall I would have to say hats off to A. Randolph at this years JITG Music Festival.

Our next performer was Trombone Shorty & Orleans Avenue. Man these brothers could play the horn, and trombones; they did not disappoint at any means. Talk about blowing a trombone until you fall out, this man could play like our most prolific players of the past; Al Grey and J J Johnson just to name a few. It was a real treat to hear the brass sound of the trumpet and the trombone it was electrifying and it shows throughout the crowds. Trombone Shorty & Orleans Avenue thank you for gracing us with your presence.

Up next we have none other than Smokey Robinson, smooth as he always is. He approach the stage wearing an all red suit. He had this red shirt underneath that exposed his chest just enough to tempt the ladies into temptation of lust and desire. I could hear the women from the back of me screaming ” Sing it Smokey” & ” Yes, yes Smokey” as they sing along with him as he sing many of his greatest hit from Tears of a Clown, Ooo baby bay, You really Got a Hold on Me and many more. The crowds were standing throughout his performance as they belched out his tunes. Smokey Robinson’s went on to be more daring as to bring onto the stage two beautiful music goers that were more than eager to greet him with a slow sultry dance then embraced him with a hug. They were used to edged the crowd on even more as he ended out his night. All in all Smokey Robinson you get an A+ on my report card.

Fantasia, Fantasia, Fantasia need I say no more. This young lady kept it as real as it comes on last night stage; no wonder she has “Fan” in her name. The fans went wild last night as she embraced the stage with her presence. Right out the gate, she lets you know she is grown, and not playing games, that she is an adult, and that all games have been placed aside. Now keep in mind I was not a Fantasia fan to say the least, I was not hating on her either, I just really hadn’t heard that much of her music to really care either way. There was only one song I knew and enjoyed and that was about it, but last night I was about to give her a chance. So I was so impressed when she opened her mouth and started singing. She song, songs from back in the days and gave tribute to Tina Turner. The most important part of Fantasia show to me was when she took the time to HONOR GOD and ask if there were any that has not accepted Christ as your savior; now was the time. Fantasia for that you will now always have a new FAN.

Chaka Khan, Chaka WHAT? What a totally and utter mess on last night. I would prefer that poor little Chaka Khan would have not come out on stage looking and definitely not sounding or in her case not sounding like she did last night at the JITG Music Festival. It was clear to see that IMMEDIATELY as she hit the stage and tried to open her mouth and nothing came out but screeching sounds; everyone starting packing up. When she stood there like a deer in headlights with nowhere to go and could not remember the words to her own songs; people started packing up When she played with her hair more than singing, people were leaving the stadium, when she walked as if she was staggering across the stage at times people were already telling of stories of how this wasn’t the first time she has come on the under the influence. Chaka Khan if it’s rehab you need by all means take it, it does no justice to try and perform and your backup singers are the ones we are paying to hear..so unfair. To the backup singers, thank you for putting up with the nonsense of the entertainment business and covering for the seem to be under the influence, late running, and sometimes not so nice bosses; we thank you. As for Chaka Khan and her performance, it left many dissatisfied and broken hearted to see her that way. Get better Chaka Khan I am rooting for you. 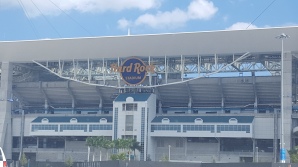 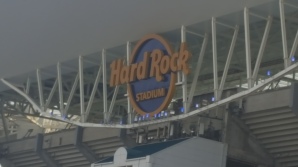 To all the performers Thank you for entertaining me, I really enjoyed your music. Look for my next blog on part two performers.

Posted in 2018 Jazz In The Gardens Music Festival, Music, Uncategorized